During the nearly nine years I've been sharing these columns with you, most of the instruments we've discussed have dated from the middle of this century, or earlier.  This month, however, we will look at a finely crafted, historically interesting instrument of more recent vintage: an NBN Limited Edition guitar, made about 1975.

NBN was a small company (employing just five or six people) located in .  The founders Monty Novotny, Reb Bennett, and Bernie Nettesheim developed early design prototypes between 1966 and 1969, and founded their company in 1969.

Nettesheim dropped out shortly after NBN was established.  An old schoolhouse building located at the intersection of and served as NBN's headquarters, until the firm went out of business in 1976.  Though NBN apparently was never very profitable, it did leave a legacy of approximately 350 steel string guitars, 20 banjos, and eight to ten classical guitars.  These instruments feature innovative designs, beautiful craftsmanship, and a well-balanced tone of exceptional clarity.  Many of NBN's customers were professional musicians including James Taylor, Leo Kottke, Steven Stills, Peter Yarrow, and Paul Simon.  (I am indebted to Reb Bennett's brother Andy for historical information on NBN.  Andy was an NBN employee until the demise of the company.)

Monty Novotny seems to have been the driving force behind NBN.  He originally worked as a master craftsman for the Ode Banjo Company in .  After Ode was sold to , Novotny stayed on for a short time until moved all the Ode operations to its plant at .  By this point, prototype NBN guitars were already being built.  It was at Ode that Monty met Reb Bennett, who became a co-founder of NBN.  After NBN's demise, Novotny continued to make instruments under his own name until about 1981.  He died of leukemia in 1983.

The Style 1 was quite plain in ornamentation, although very well made.  The Style 2 featured more trim, while the style 3 featured a bound peghead, scroll pearl inlay on headstock and fretboard, and a carved heel.  Ranking above the Style 3 were limited-edition or custom guitars, such as the one illustrated here.  The body size and shape of the guitar featured in this article was NBN's standard ? 16 ¼" wide, 4 13/16" deep.  The company also made a few smaller guitars, slightly smaller than a standard classical guitar. 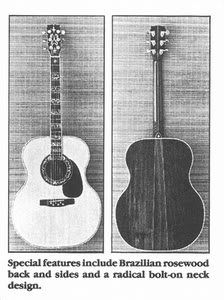 The Limited Edition model pictured is an excellent example of typical NBN design features.  The top is   The back and sides are Brazilian rosewood.  The bracing is a modified fan pattern, based on the design of noted French classical builder Robert Bouchet.  The neck fastens to the body with a tongue-in-groove joint and is held in place by two bolts rather than being glued, a fairly radical idea in conventional acoustic instrument lutherie.

The truss rod in the neck is of a special NBN design, adjustable in both directions so it can counteract forward or back bowing.  The neck is fairly wide at the nut, 1.726", but it has a very shallow depth.  The result is a fast-action neck that feels almost like that of an electric guitar.  Thin it may be, but it has stood the test of time, enduring years of pressure from the guitar strings.

The neck itself is mahogany, with an ebony fretboard.  The catalog specifications indicate ebony fretboards on all models, but call for a rosewood neck on the Style 3.  Beautiful carving decorates the neck heel, rivaling the best work of the great banjo carvers of the '20s.  Most of NBN's carving was done by Art Frans, an employee of the and a master wood carver.

The arrangement of bridge pins was designed to prevent splitting of the bridge along the line of the bridge-pin holes, a common problem on standard design bridges.  The bridge saddle is compensated for accurate intonation.  The guitar features ornate abalone inlay on the headstock, on the fretboard, and around the soundhole, as well as abalone trim around the edge of the top.

NBN took pride in being self-sufficient.  Even the molded, vacu-formed fiberglass hardshell case, with plush interior, was a special NBN design produced at the company by John Cowen.  With the exception of the Grover Rotomatic tuners, virtually every component of NBN instruments was made in their own shop.

While aesthetics are a matter of personal taste, and NBN designs may not appeal to all players, those instruments are without question highly innovative, and made with the highest skill.  NBN?s corporate career was brief, but it earned its place in the history of American guitar making. 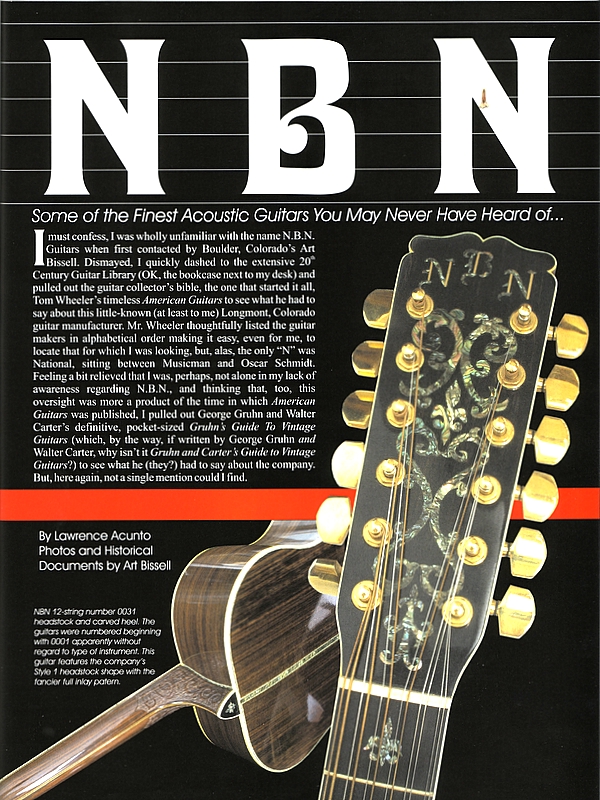 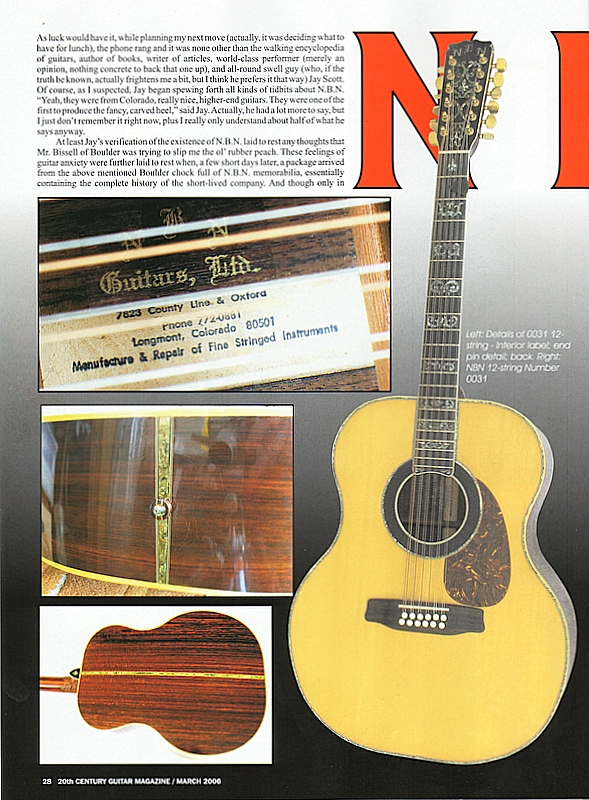 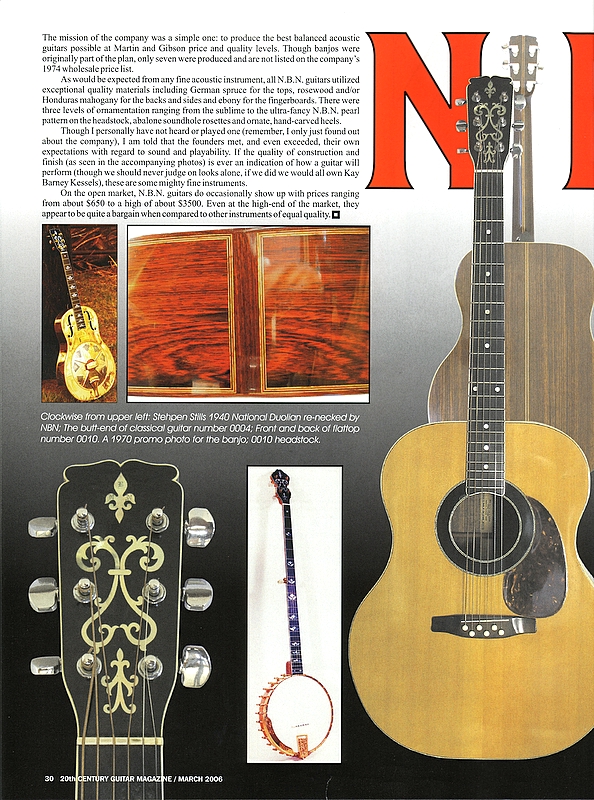